For its first participation in NADA Miami, Sans titre proposes a solo presentation by Danish Berlin-based artist Tanja Nis-Hansen (b. 1988).

Working between the mediums of painting, text, and performance, Nis-Hansen takes as her subject the body’s presence amid contemporary capitalism - anxious, waiting, resting, ill or non-functioning.
Her semi-autobiographical works, which explore motifs including waiting rooms, spiral staircases, moments of rest, and text statements, invite the viewer to think about female labor, exhaustion, illness, bodily maintenance, heritage, and the environment. Perceptible throughout Nis-Hansen’s stylistically diverse oeuvre is an abiding curiosity about the history of painting and the social construction of hierarchies of taste. The artist evinces a fascination for theater and stage design, which in her paintings surfaces not only through the inner logic of space on the canvas, but also through an all over “theatrical” mode of representation.

For NADA she has conceived a new body of works inspired by what Edward Munch once described as “the age of the pillow”: a profusion of depictions of sick children in bed around the late nineteenth century. Nis-Hansen’s approaches the bed as a stage, a place where one spends time and conducts actions throughout one’s life, not only in sickness. It is a site of rest and comfort, but also of anxiety and loneliness. A timeless place, where one is closest to one’s private self, the bed comes to represent the performativity of our actions, whether or not there’s an audience present.

In four large paintings, representing the four seasons, the artist inscribes her personal emotive response to each time of year. The figure in Fetal Fantasy (Autumn) sleeps without a care in the world, like a fetus in the womb. Her stay in bed is blissful, a sanctuary. The figure in The Expert Says No (Winter) is haunted by stress, hiding under a newspaper. This latter evokes the extreme tensions of current events, illustrating the role of the bed as a place of imperfect refuge from malign forces in the outside world. In Tight Tendons (Spring), a masturbating figure represents the potent energy of springtime, a period where tensions are released. Alone among the four paintings, From Mourning Till’Evening (Summer) contains no figure: the bed is empty. For the artist, an empty bed means no one is inhabiting it anymore, sometimes for tragic reasons. Summer in the popular imagination is an overwhelming and complex period, typified by pressure upon individuals to make the most of the season; here Nis-Hansen has imbued it with a sense of grief and loss.

Presented next to this series, Flowers For The Continuous Katherine Mortenhoe (2022) presents the poignant juxtaposition of the act of care-giving to the ill and the offering of flowers, themselves delicate, fleeting, and in some sense, mortal.

Accompanying these larger works, Nis-Hansen also produced a new series of small format pieces, emblematic of her practice, which further explore the performance of the human body upon the stage of the bed.

The artist was awarded the Neue Kunst Hamburg grant with Niclas Riepshoff (with whom she forms the performance duo CONNY) and a grant by the Danish Art Council in 2019, after being nominated for the Hamburger Arbeitsstipendium, the Hiscox Kunstpreis and the Schues Nachwuchsförderung all in 2018. In 2023, the artist will have a solo exhibition at palace enterprise, Copenhagen. 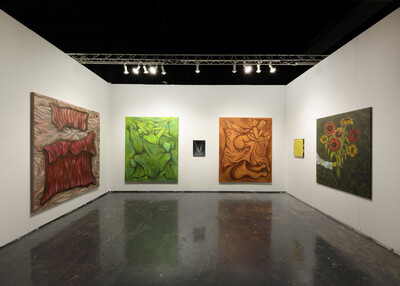 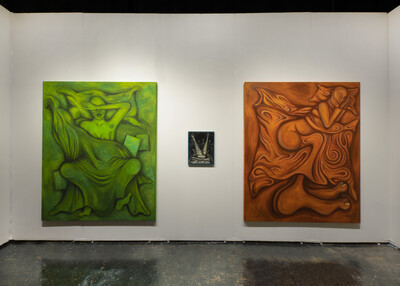 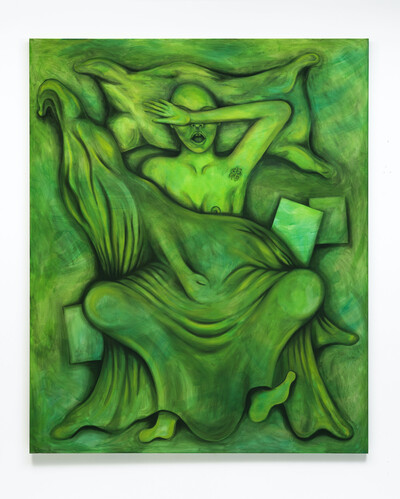 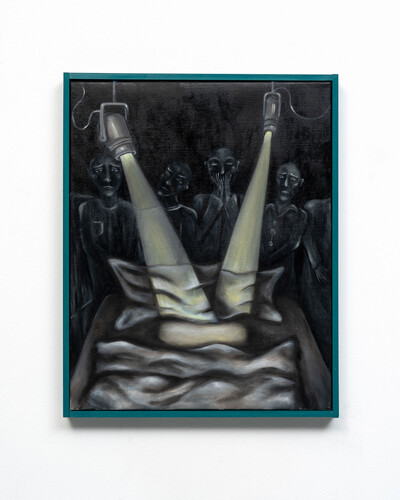 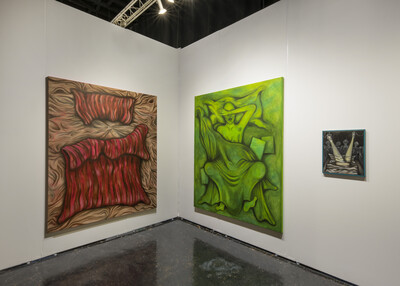 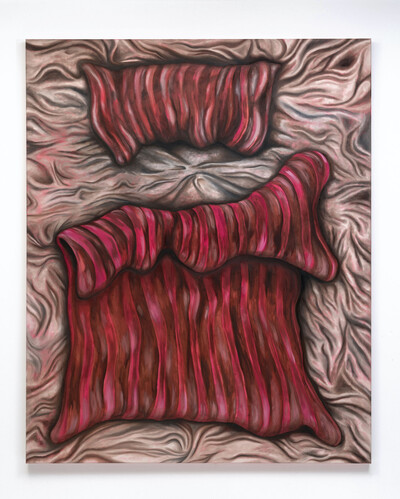 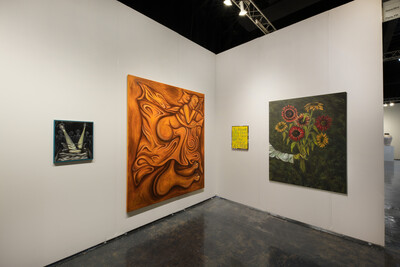 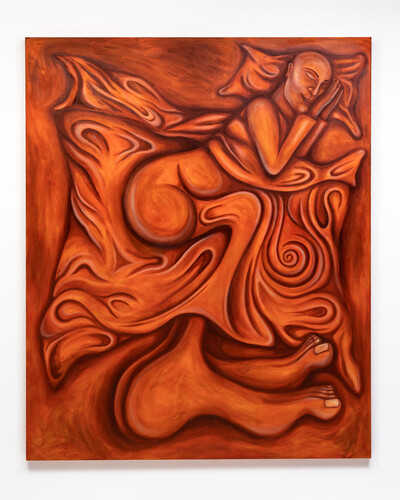 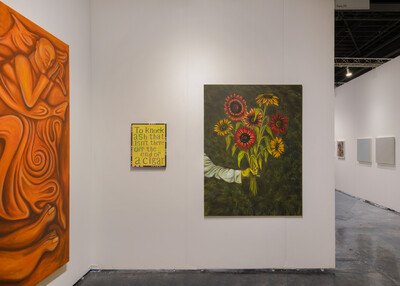 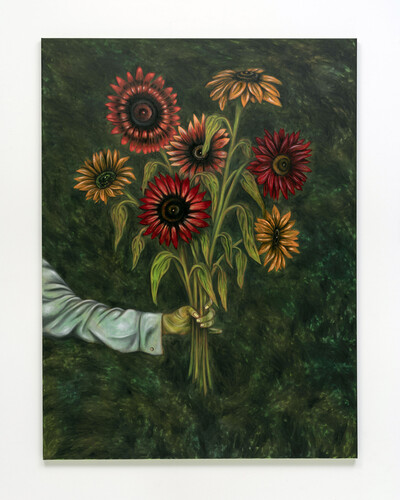 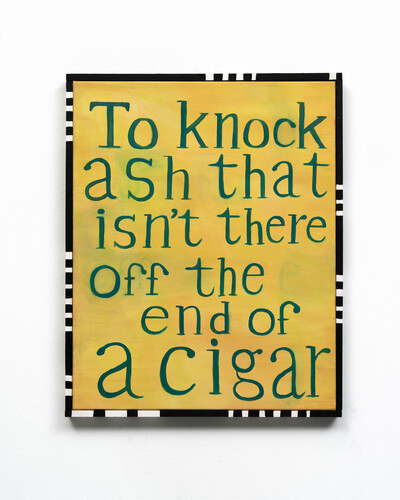 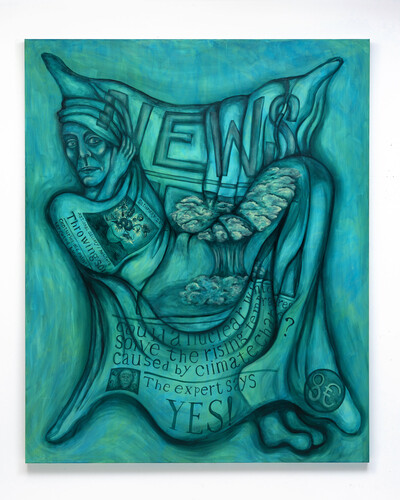 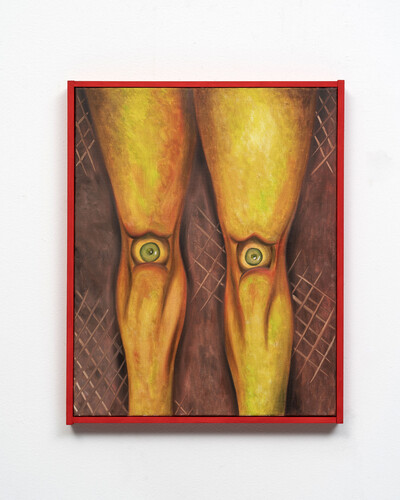 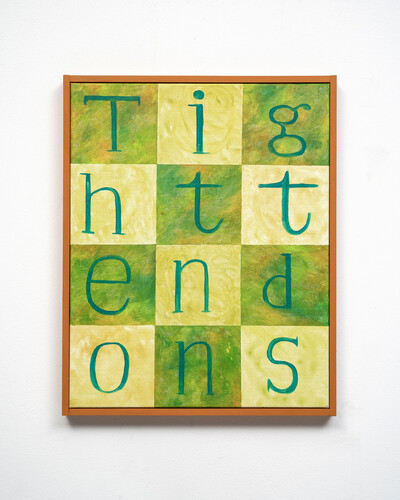